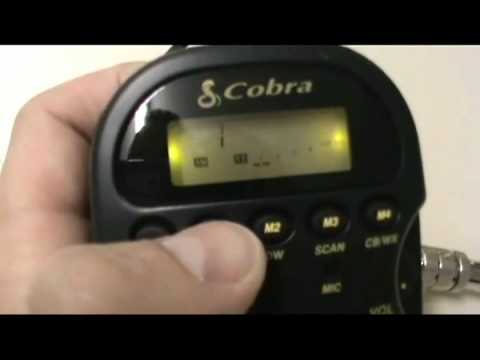 This is a compact, remote mount CB. Radio basically has a handheld unit and then there’s an actual base part unit that mounts separately out of the way, so that all you will have actually showing in the vehicle, for the most part, is going to be the handheld portion of the unit. So let’s open up the box and we’ll go through the features and show you what this unit is all about. So the Cobra 75 WX ST, is a two part unit, as you can see, there’s part number one here, which is our remote mounting part that’s, where your power wires come in it’s, also where your coax connects and there’s. Also, an external speaker, jack really isn’t a whole lot inside that control box there’s really no need to open it, there’s, no adjustable controls or anything inside of there. You can’t really mod it for more power from there. So no reason to open that up, basically inside to just find the power wires going in the speaker, jack and the output wires going out here on your jack that runs to the main unit. So this jack is like a five pin microphone type connector. One of these is hot, so make sure you don’t try and connect a standard, five pin mic or anything to this unit. You’Ll blow it up. This is designed to only work with the main unit that connects to it, and here we have the main unit. This is the main hand, radio.

Basically, this is basically a handheld type unit that connects to the power and out to the coax Jack. The microphone is located here in the front of the radio as well as the speaker is located here and it’s underneath the sticker. We can remove the sticker and you’ll be able to see the speaker holes, so the speaker and the microphone are mounted on the front faceplate underneath inside the board is mostly surface mount technology and the actual final transistor and most of the parts for radio are inside. The handheld unit, the final transistor, is actually down here in the back and we’ll show that once we get inside the unit, that’s got a little bit of venting here for heat, as the full transistor and board is all located in the unit peeking. These trying to get more power out of them isn’t a great idea anytime. You have something that’s in such a small housing it’s going to have issues with heat and early failure rate. I did find a way to boost the modulation. A little bit. I’Ll show you where that pot is on here, but overall I really don’t suggest doing much to these radios. Ok, so let’s power, the unit on we’ll turn the volume knob turn up and hear the static will turn the static off. Ok, as you can see on the display, it shows the channel. It shows that we’re in AM mode and shows that we’re in our X receive mode and there’s your meter on the side there, showing your receive s units.

If we push the push to talk button here on the side, you will see a key showing the output power. We can change channels using the channel changing buttons on the side there, so we can go up or down and frequency the memory button. I have a mess around just storing some frequency in here. If you want to retrieve a memory function, one of the channels you can jump to it, so you press the memory button once press the channel. You want to jump to so I’ve stored channel 1 in the memory one button M 1. I want to go to M 2. I press memory M to store channel 6 in there and M 3 and M 4 and so on. Now, if we want to store a frequency, so let’s say we want to store channel 23 in M 4. What you do is you press the memory button once then, you hold down m4 until it beeps now we’ve stored channel 23 in the m4 location, sound tracker button, of course, repressed. That you’ll see the sound tracker function pop up they’re supposed to reduce some of the noise. I personally never really liked it, but some people like to to use it the CB Weather Channel. If we press that button it’ll jump into a Weather Channel function – and you can see you can scroll through available 9 weather channels, we ate a lot of corn, so that does work fairly well on the scam function.

We’Ll go back to CB mode by pressing that CB WX button again and in scan mode. Basically, if you turn the squelch up, so the volume up – and you turn up the squelch there. If we hit the Scan button, it’s now going to scan through every single channel and look for someone talking as you can read, and it will go through all the channels until it finds someone talking on a certain frequency. And then you can turn up the squelch and continue scanning the dual watch button. The DW button you can set it up for two different channels to watch both those channels for any frequency breaks from people talking. So what you do to set that so let’s say channel 6 is a channel we’re on. We can want to check the two channels that we’ve programmed in and press that dual watch button it’ll start jumping and we’ve programmed in 17 and 14. So it’ll just listen on 17 and 14 now and if someone talks we’ll hear it, you can turn that off by pressing that now. If you want to store and pick those frequency, so let’s say well, do channel 6 and channel 1, so we’ll hold down the DW button until it beeps now, it’s picked, channel 6 and then we’ll free is down to channel 1 will hold that one down and Now it’ll dual watch between channel 6 and channel 1 channel 9 19 of course goes to channel 9 channel 19 press it again to return back to normal.

The lock button will lock you out from doing anything on the radio. Of course, our volume and squelch knobs I’m sure you’re quite familiar with one other interesting thing is: if you hold down the memory button for a couple seconds, it says 3 seconds in the manual but it’s more like 5 seconds, it will switch to a frequency display And it’ll show the frequency that you’re on instead of the channel so for audio and output on this unit, when we key this unit we’re seeing about 3 watts with regular talking into the unit we’re, seeing about 6 watts max with the whistle it will swing up To around 9 to 10 watts with a real, strong whistle, but otherwise you’re basically yelling to try and get it to go above 6 watts. So this is the inside of the remote unit and you can see the power wires coming in the backside of the coax connector, the external speaker jack. So there is an external speaker, jack on this unit. So if you do want an external speaker instead of the tiny one that’s inside the hand unit, you definitely going to be a little bit better, sound, not a whole lot going on here. This is just basically where the power is coming in and you can see the coax connector piece running up inside the wire that runs up to the main unit that you hold and will open up that unit for you as well.

Once you remove the face plastic on the unit, you can see the control knobs and the board on the front part. The back part of the unit is probably of more interest to people, as you can see. It’S surface mount technology and everything basically for the radio is installed in this back little section, including the final transistor here at the bottom. Most people would try and look for a modulation adjustment it’s been posted widely that there are no modifications for this particular radio, which is actually false. You can adjust the modulation on this radio. I think most people know where the pot was the adjustable location for the modulation on the 75. Wx is right here: it’s a continuous pot, meaning it’s. It doesn’t have a set point. So if you turn it all the one way it’ll actually just keep turning. So you have to just adjust it. The side here is going to be lower modulation. The side here is gon na be higher modulation. So if you just it so it’s pointing more towards the higher modulation side, it will boost your modulation, brought off the audio on the unit quite a bit. It did swing, then, from about three Watts up to about eight watts. Just with audio and with the whistle you can easily hit 10 now transistor is in this unit is gon na get very warm. So if you run this radio like this, you may run into overheating issues and failure fairly quickly, so it may not be recommended to turn up the modulation to try and swing more wattage or get more audio out of it or if you turn up the modulation, You may want to try and lower the output power of the radio, so that’s just a little mod.