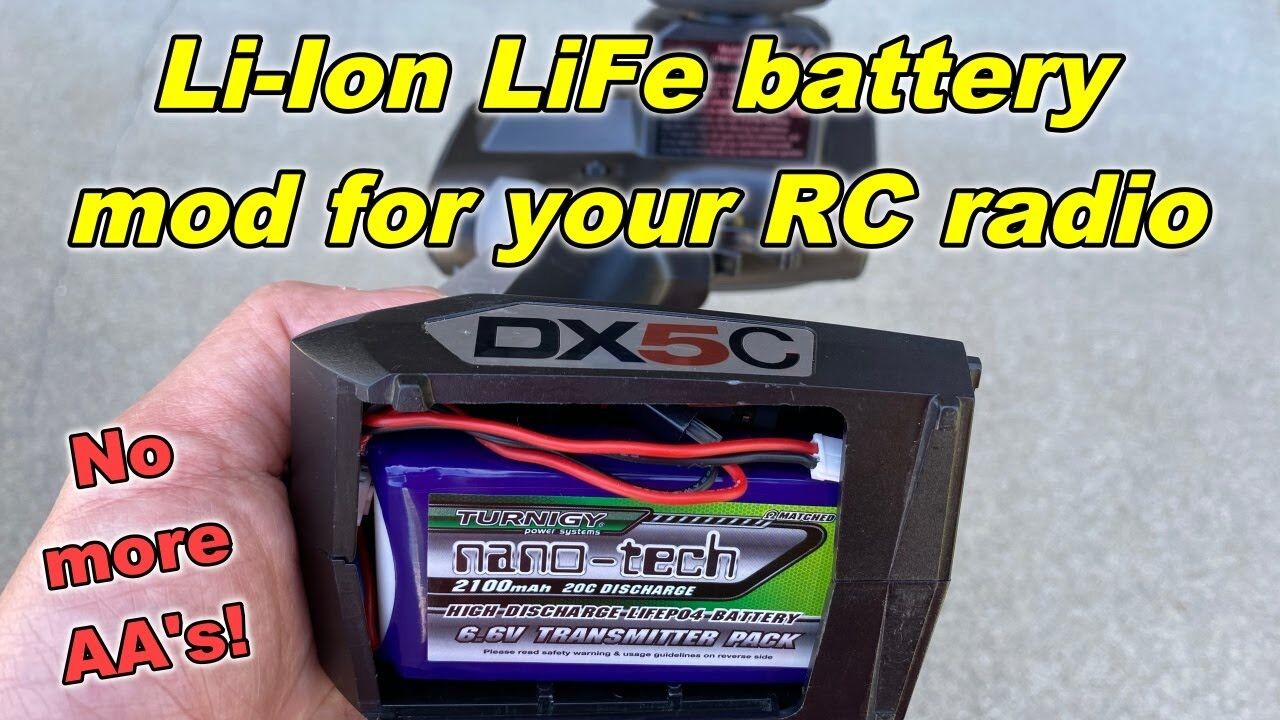 I got another little hack for you today and we’re gon na be talking about how to use a lithium battery for your RC radio. So most RC radios, especially the cheaper ones, come set up for double a batteries, usually for double A batteries, including this. The spectrum DX 5c mean I’m, not a big fan of the double a batteries, because they’re kind of clumsy to use you know you can’t, really recharge now, so really a popular modification I make to pretty much all my radios is to get rid of those double A’S and run this so I like running these – this is a lithium iron battery, so it’s a life battery life po4 battery. Some people like to use lipo batteries I’m, actually not a big fan of using lipo batteries in your transmitter, because lipo batteries are a little more unsafe. You know they can catch on fire. If you throw them, you know sort of storm away in your closet. For a long time they can discharge and damage themselves, so life battery is a lot more safe and then the other big advantage of life batteries is that it runs at six point, six six point: seven volts fully charged, which is a lot closer to four double. A so for double a s is going to be 6 volts. If you try to run a lipo battery, you’re gon na be running at like 8.4 volts for a 2s battery, which is just like pretty much way too high.

Generally, especially for something like this. A spectrum DX 5c: this is actually only rated at 6 volts. If you call up spectrum they’ll say you know: don’t do that we don’t support it. So this one higher percent will void your warranty. So if your care about your warranty, then do not do this modification little disclaimer there, but I like doing this and it’s working out really well, so I just want to show you how it’s actually done so. This is the battery I’m using a turn. G nanotech. 2100 milliamp hour battery it’ll last somewhere around 1520 hours, or so in a in a transmitter so a pretty long life. I would get something at least 1500 milliamp hours to two thousand. You do have to want to find one that’s fits this. One definitely fits but most other life batteries do not fit so put a link down below, and you see how it’s actually how to pick one up so there’s, really only a few little things you got ta do. First, you got to cut off the regular battery tray and put on what is commonly known as the Futaba connector. So one of these guys there’s lots of videos out there on how to do it. I’M, not gon na. Do it right now, but yeah you just plug that back in use me and then a couple other things you got ta do is basically trim down a couple little tabs in here.

So there’s one tab here on the inside kind of hard to see. I’Ll put down a picture and then there’s another tab down. Here you got to kind of trim down a little bit so see if we can get a little light in there kind of hard to see, but yeah, basically one tab, yeah. I remove all the way and the one you got to kind of trim right down there. You can see it’s kind of like cut a little bit but that’s just to make room for this battery just to make sure it fits because it’s a little bit wide. It’S hard to find a battery that’s like thin enough so that’s, the the main thing you’re gon na have to find. But this one fits pretty much perfectly I’m, just kind of tuck that in away throw the extra battery wires on the side there and then yeah, it just fits pretty much right in there so close that up and then you can turn it on and then you’ll See dx 5 see it’ll, check the voltage and show you yeah six point: seven volts, so yeah six point: seven five volts is much closer to say four doublea’s, which is six volts, so yeah that’s, just a nice little easy hack for your spectrum, DX 5c or Really any radio should be able to run one of these as long as the battery will fit. I will say one thing about life batteries you ding at it and do need a charger that will actually charge life battery, so some are only lipo compatible.

Most will actually do nickel metal hydride lipo life and other types so make sure you have a life battery charger with a Futaba connector and the other thing I would note about life batteries if you’ve never used one. Is they kind of a flat discharge curve? So pretty much you’ll sit at like six point. Seven six point: eight volts fully charged six point, six, just kind of stay at that all the way until it’s almost fully empty, and then it will drop down to like six point. Five six point: four what’s: it hits around six point four volts it’s, actually like 90 discharge. So when you see a drop off a lot of people get that confused and they’re. Like oh six point, five volts six point: four volts: I got plenty of juice left, but no actually, once it hits down to that six point: four especially six point: three volt range you’re pretty much fully empty and it’s time to recharge. So, just something to note if you never use life batteries before, but I do like these a lot more than the lipo bags just because there are lots t4 they’re quite cheap as well. I think this one’s somewhere around twenty to twenty five bucks and then yeah the voltage, matches a lot closer to four double a’s than something like a 2s battery, so anyways. I hope you enjoyed that video definitely like share subscribe, hit the a notification button.